The second wing for Curse of Naxxramas, the Plague Quarter, has been released. There were a few bumpy issues on launch purchasing the new wing with gold or real money wasn’t working but that has been resolved now. Some very interesting match ups, specially the third boss, Loatheb. It was a huge shock to see what this guy started with but thankfully the play quickly turns in your favour. The Class challenge was relatively easy as well. Next stop will be conquering the Heroics in the Plague Quarter!

I’ll post up the decks I used to conquer the Heroics soon. Share your decks with us!

You’ve made it through the Arachnid Quarter – now, hone your skills and ready those antibiotics – Curse of Naxxramas: The Plague Quarter has opened its gates to players! I wouldn’t touch anything in here . . .

The Plague Quarter houses some of Naxxramas’ most “catchy” bosses, who would love to infect you . . . with fun! Victory over these masters of unsanitary conditions will reward you with all-new Hearthstone cards! 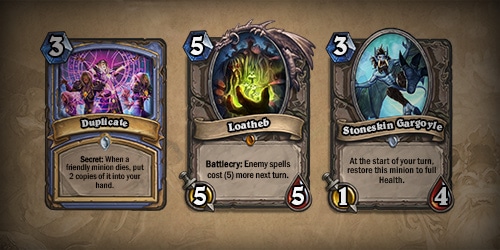 Bring some hand sanitizer, because the next boss you’ll face in The Plague Quarter is Heigan the Unclean! His Hero Power, Eruption, will be sure to keep your minions on their toes! Defeating Heigan will reward you with two Unstable Ghoul cards for your collection. 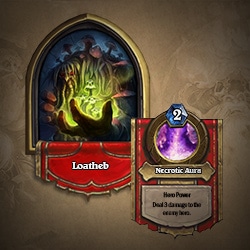 The master of miasma, Loatheb, is the final boss of the Plague Quarter. Loatheb won’t be a spore loser if it is defeated – victory over Loatheb will reward you with two Sludge Belcher cards for your collection!

Defeating all of the bosses within the Plague Quarter will reward you with the Legendary Loatheb card for your collection!

Lurking within this wing are two Class Challenges that will become available to players that have defeated all of the bosses in the Plague Quarter on Normal Mode. These Class Challenges will put your skills with those specific classes to the test! If you overcome these Challenges, you’ll be rewarded with new class-specific cards to add to your collection.

Experience all of the fun(gus) of the The Plague Quarter in Curse of Naxxramas: A Hearthstone Adventure today!

Naxxramas Curses You All!

Naxxramas’s Undead Knights have been Unleashed!